https://www.youtube.com/watch?v=z7fmp4gLUjQ
You are using an out of date browser. It may not display this or other websites correctly.
You should upgrade or use an alternative browser.
No comments have been found at this time 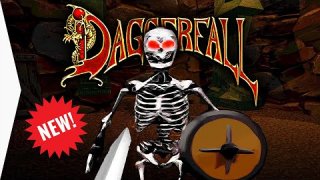 Jun 18, 2022 at 3:44 PM
Posted by finegamingconnoisseur
Want to know how to get started in Daggerfall? The long forgotten gem of The Elder Scrolls universe. Well now there's a new version that I had an itty bitty hand in making available. The GOG Cut! Get it here: https://af.gog.com/game/daggerfall_unity_gog_cut?as=1715648857

The vast majority of Elder Scrolls fans began their Tamrielic journeys when the series went a bit more mainstream, most notably with Oblivion and of course Skyrim dominating the Western Fantasy RPG genre for over a decade, and when those modern fans get curious about the older Elder Scrolls games they try to step back into the janky world of old school gaming and struggle hard enough to disembark the ship onto my favourite land, Morrowind. The dice rolls alone put so many off, if the character animations didn't already. Even if they could excuse the gloom, it would be a grand and intoxicating experience to expect modern gamers to excuse the flaws worse than Morrowind's.

However, I started with Morrowind and know that past the jank is one of the best examples of worldbuilding and writing there is in gaming. So at some point, I wondered about the earlier 90s entries. I tried Redguard... and it is an amazing adventure game that holds up today (I'm not joking). It has some of the best voice acting in all of Elder Scrolls... and some of the worst... but at least it's funny. Somehow, even the jumping and parkour doesn't feel terrible. Now, beyond Redguard lay Daggerfall. The one that the old school gamers insist is THE BEST Elder Scrolls game. But why?...

Up until a few years ago, playing the game could be a challenge itself. If you got it running, interacting with it felt atrocious. Many couldn't even figure out how to look down to hit that first rat. This game is so old it barely had proper mouse controls and although the world was 3D, every character, enemy, and tree were 2D sprites with a few frames of animation... It's a whole other universe of jank compared to Morrowind's. But maybe... as with The Elder Scrolls 3, the bigger the rough the bigger the diamond? And then, Daggerfall Unity entered the spotlight.

This was an engine replacement for Daggerfall using the Unity engine, meaning improved performance, better controls, and anyone with Unity experience could change the game however they liked, opening up modding like never before. Not too long ago, Daggerfall Unity entered Beta, which meant that it was feature complete. Everything from the original Daggerfall was now in the Unity version and the modding scene began to grow. Graphics overhauls, immersion additions, and more have been created, making right now the best time ever to play Daggerfall. I made a video in 2021 showing off what was possible and it seems I did it right because people were pretty happy with what I demonstrated, and now things are even better.

Today, I'm here to show you something that I assisted with. People from GOG saw my video and wondered if it was possible to make a modded version of Daggerfall using Unity and mods. They asked Bethesda and they were into it, along with the Daggerfall Unity devs, and the GOG cut was planned. Loading Daggerfall Unity with choice settings and mods was the idea and they asked me to help choose which mods and what settings to use to create the best experience possible for newer gamers, since everyone seemed to like my choices when it came to modding Elder Scrolls games. I like to keep it vanilla friendly but also to add things where it feels empty, along with lighting tweaks to get the vibes just right, and it's done... for now.

♣ DISCORD - Hang out with the fantastic community
https://www.gamerzakh.com/discord

♥ PATREON - Support what we do
https://www.gamerzakh.com/patreon

♦ MERCH - Things I designed myself
https://www.gamerzakh.com/store

BUY ME A COFFEE - Tips to support
https://www.gamerzakh.com/coffee

I remove ads as direct support grows, so your help allows me to make things better for everyone.

Subscribe for more and thanks for watching!
Keywords
Brotherhood of Gamers
0     0     257